The 21MX was the next series on from the 2100 series machines. Instead of Core memory, the 21MX used 4kBytes of SRAM. The only problem was the SRAM wasn’t yet in production (1974). In 1976 the 21MX E-Series was developed, as an upgrade from the orignal 21MX, now called the M-Series. Because the CPU had a 15-bit address bus, it was limited to the usual 32kWords of RAM. In order to get round this, HP developed the “Dynamic Mapping System”, allowing 20-bit addresses up to 1MegaWords. This lead to the name MX, with “M” being the CPU and “X” being the Memory Expansion units.

The 21MX E-Series was almost identical to the previous M-Series, except for some added expansion slots, and most importantly a small hardware redesign which meant the clock speed was doubled. 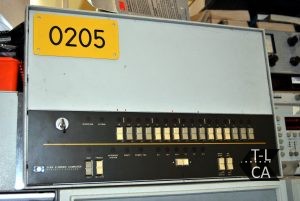