The Synertek SYM Model 1 is a single board computer, and designed to be very versatile, allowing the user to make use of its IO and expansion ports. The SYM has 1k RAM standard, but is expandable to 4k. It can use 8k of ROM.

It comes with three interval timers available to the user, 1k of RAM on 2114 chips, expandable to 4k on-board. the 4k ROM for the Resident Monitor, and three ROM/PROM expansion socket for the user to add programs. These will take 2316/2332 and 2716 EPROMs.

There is an Application port with 15 bi-directional TTL lines for user application, with expansion capability for added lines. Expansion port for add-on modules, with 51 I/O lines included in the basic system 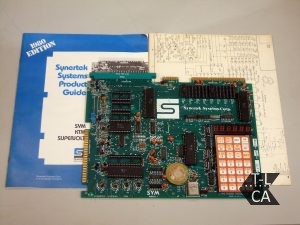