The Sirius 1 is a computer built to be a competitor to the IBM XT (though it was not fully IBM-compatible). The computer and the Sirius company was formed by Chuck Peddle and Chris Fish. Chuck was famous for heading the design team to create the MOS 6502 CPU, one of the founding stones of modern computing.

The Sirius company was bought by Victor Technology in 1982, after which the Sirius 1 computer was called the Victor 9000. The PC sold well, especially in the UK and Europe where the IBM XT had not yet been released, or was very expensive in comparison. By the summer of 1984, Vistor Technology had filed for Chapter 11 (protection from bankruptcy).

In the UK, the Serius 1 was distributed by Applied Computer Techniques (ACT), renamed to Apricot, then back to ACT.

One advantage the Sirius had over other systems was the use of use of constant bit-density disc drives. That is, unlike most floppy drives where the disc would spin at one speed, the Sirius drives would slow down as the head moved towards the outer tracks, keeping the head speed fixed. This allowed for a much greater bit density, and thus increased capacity. 600kBytes were possible on single-sided discs, and 1.2Mbytes on double-sided. In comparison, the IBM-XT had 360kBytes double-sided drives. 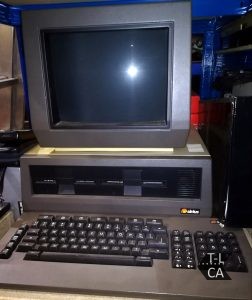