The Robotica Edubot is a 5-axis articulated robotic arm, designed by Cemal Ozturk of Robotica Ltd. in Glasgow between 1996 and 2006. The EduBot cost £1067.58 and was known as Model 100 GP. It was designed to teach robotics and principles to engineers, and has all the problems associated with large-scale robotic arms such as slew rate changes depending on the distance the arm grippers are from the central axis.

The robot is constructed out of anti-static PVC plastic, with a very heavy metal base. It uses Puse Width Modulated servo motors for all operations. The Edubot 100 was avilable with either Grippers (GP) or a Suction Cup (SC). An R/C Servo Controller II was required to operate the robotic arm from a PC. External input/outputs can also be provided to control the EduBot via the two analogue inputs, four digital inputs and three digital outputs. The R/C Servo Controller II uses a PIC micro in its design.

By using the Robotica Control Software, the EduBot can be controlled either manually or through a programme sequence. All analogue/digital inputes and digital outputs can be observed constantly and controlled by a mouse click. User-specified limits can be recalled from a saved file. Programming is via easy-to-use character commands. Programming can be carried out either using Design mode using a list of commands or Record mode where the computer records every action to play back afterwards. 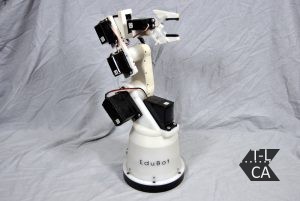 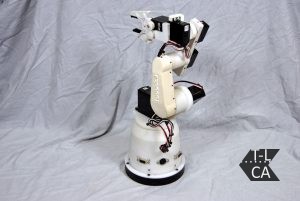 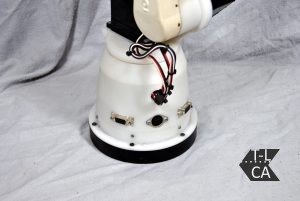