The Compugraphic MDT 350 is not a “Personal Computer” as such, it is a Typesetting computer. Specifically designed for publication design. Essentially it is a glorified typewriter. The computer could be connected to an industrial printer machine for producing newspapers, magazines and such like.

It is built in the US, using an Intel 8080 CPU. The computer has no hard drive, only a 5 1/4″ floppy drive. The CPU board has a lot of EPROMs on board. I suspect these would run the Typesetting software.

The “World of Digital Typesettings” describes the MDT 350 as a “MiniDisc Terminal” (MDT), and puts it under the “Stand-alone Keyboards and Text Editors” heading. It also mentions the “Mini-Publishing System” dated 1987 as being built around the MDT 350. Also mentioned is an interface system for a Quadex to the MDT 350.

The pubilication “Upper and Lower Case 2nd June 1980” has a quick note on the Compugraphic 350. It can be used in combination with a TrendSetter, this being a photo-quality typesetter printing machine. The work can be typed out on the 350, saved to disk, and that disk read by the TrendSetter and printed direct. It can print at a speed of 50 Lines per minute. It also mentions the Compugraphic 6800 high-speed phototypesetter printer which also accepts 350 Disks.

An article “Communications technology in the land grantuniversity setting” by Larry Whiting in 1981 tells of the Oregon state spent $5,000 on a Compugraphic 350 and an interface unit to give it transmission capability. They spend a further $58 a month leasing a phone modem. He mentions the disks hold 90,000 words each (doesn’t say data-word or text-word), and pages can be tramsmitted via phone line at the rate of 20 to 25 seconds per page of double-spaced text. The article also mentions how the Compugraphic is more complicated to use than other makes.

The 350 in our collection came with a MDR (Mini-Disk Reader) disk controller, which allows data on the mini-disk to be sent to a phototypesetter. 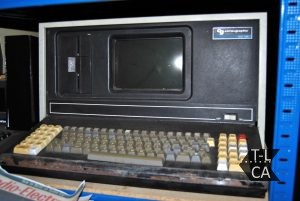 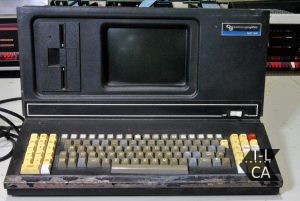 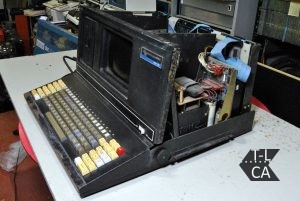 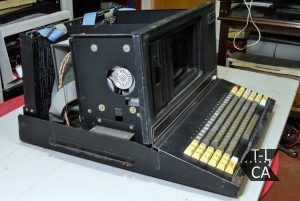 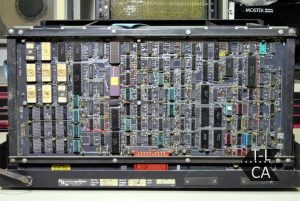 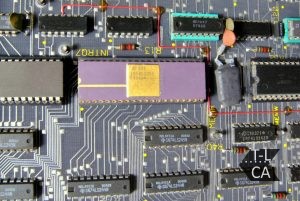 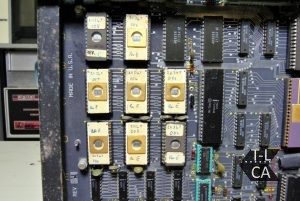 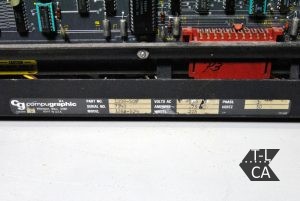 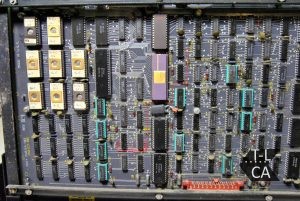 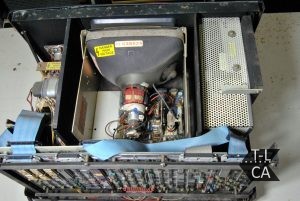 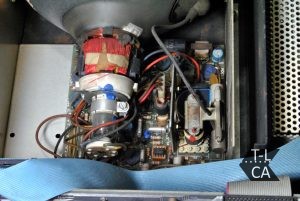 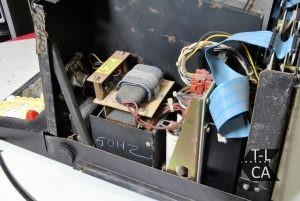 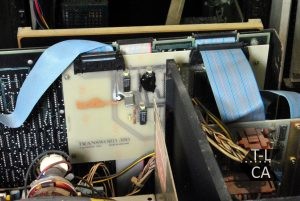 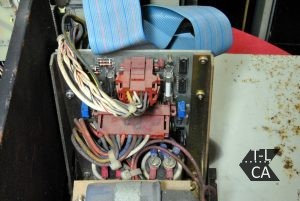 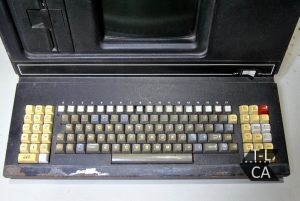 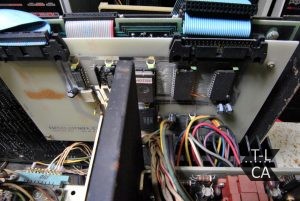 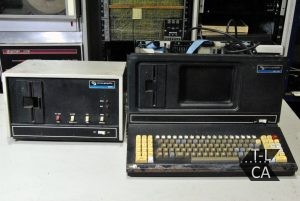 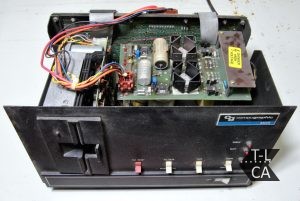 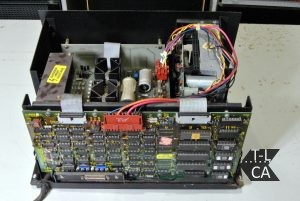 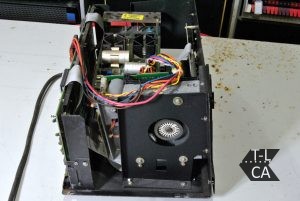 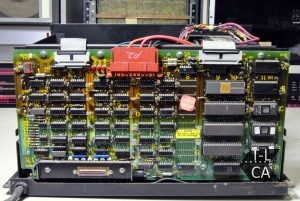 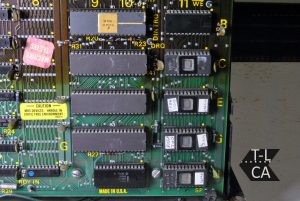 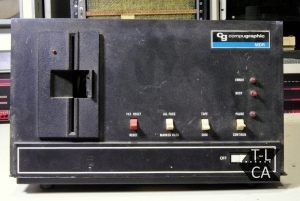 Lucio Etruscus has kindly given his permission to tell his experience of having a Compugraphic 350 at home when he was 8 years old. His Blog can be hound here.

This photo (see below) of the spring-summer 1982 portrays me at 8 years old intent on writing my first non-fiction eBook! As evidence of a vice that I have never lost …
I am in the printing press where my father worked, an activity in full transformation towards the graphic service that will become later, that is, increasing more and more the use of computers in paper publishing.

Mine was not a joke, the photo portrays me seriously intent on writing nonfiction: guest of the office, I am composing a short manual on “crab hunting”, a topic that at the time I was passionate about and to which I devoted myself soul and body during the summers spent in Ostia, the seaside resort of Rome. I’m pretty sure I still have the printout of that text somewhere …

The machine I’m writing on is a CompuGraphic MDT-350 which, according to the rare information found on the net, dates back to 1980. That machine was connected to what we now call printer but in reality at the time it was a huge film developer Printing from the MDT impressed a black film that, developed in the darkroom exactly like the old photographic film, produced a positive. That is, a film – transparent or white – embossed over the black of the text, to then be sent to the typography to transform everything into paper.

In December 1982 – or perhaps before but I have not found sure traces – my parents enter into an agreement with the typography: while my father is a normal employee, my mother lends herself to work at home as a typer. She studied typing so she has no problems, and an MDT is simpler than a classic typewriter, since it can be corrected quickly. So the office lends its own MDT to my father, who takes it home and since then for several years that sarcophagus weighing a thousand tons is a fundamental piece of furniture in our home.

In our basement in the Alberone district – among the most populous in Rome – we were probably the most technological family in the whole Appio-Tuscolano! There was no concept of “personal computer” and basically … the MDT was absolutely not a computer.

I don’t know how much memory it had, but it sure tended to zero. It had no internal hard disk and was worked by saving on a 5-inch floppy disk: every time the machine was turned off everything was lost forever, so remembering to save was fundamental.
The screen was tiny – by eye it was large when the floppy, so it traveled on a 5 or 6 inch square! – and a huge internal fan made an important noise: do you know the washing machine’s centrifuge? Here … imagine eight hours of work with that noise in your ears! But I assure you that you got used to it immediately.

With a radio as a musical accompaniment, soon replaced by a more sophisticated system, a nearby disc phone and an improvised lectern, my mother recreated a sort of miniature office in the house. Also because we all used MDT for a thousand uses: the first list of the home library was born there, saved on floppy and then printed on film in my father’s office. (Unfortunately I was unable to store any floppies of the time.)

The MDT has remained at home for years: by heart I think it was only returned to the office in 1989. In 1994 it was now an anachronistic scrap that no one wanted anymore, and the mocking fate wanted me to help the office load the various MDTs on a van that would take them to the pulp. It was like suppressing an important part of my childhood with my own hands, but in the world of computing the first lesson is that everything dies quickly. 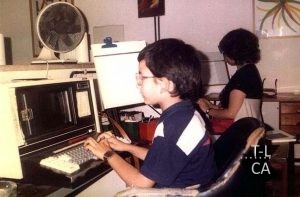 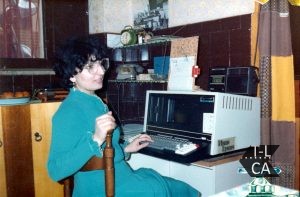 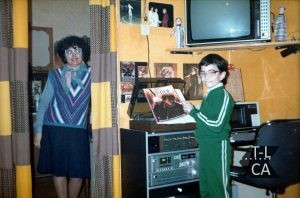