By the end of 1986, Acorn had been taken over by Olivetti. They had already built the BBC Master and Olivetti decided it needed to be remodeled to try and make Acorn profitable again. They took the BBC Master, reduced the computer down to the size of a keyboard, and put the PSU and new 3 1/2″ floppy drive into a box under the monitor. These two parts were connected by a ribbon cable, and the montior connected to the keyboard.

The CPU was a MOS 65C02 running at 1.8MHz, and it has 64k of RAM. Some may call this a backwards step, with the Master having a better CPU and twice the RAM, but the 3 1/2″ floppy drive as standard was a big bonus. The £600 price tag (£1,700 ($2,200) in 2019) was higher than the standard BBC Master, and the Master Compact had less expandabiliy, less RAM and a slower processor. The Floppy drive, monitor and mouse made up for it though.

Unfortunetly the British market had peaked in 1983, everyone had a ZX Spectrum, and the ecconomy was on a decline. Sales of Acorn did not recover and they very nearly went bankrupt. 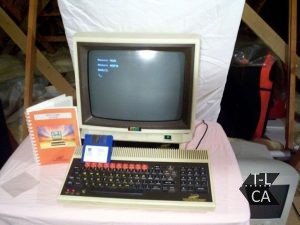