No, we don’t really have an Atlas computer. We do however have one of the last print-outs the Atlas computer at Manchester University ever did. This print-out was one of several copies printed out right before the power switch was turned off for the last time on the 30th September 1971.

Atlas was considered to be one of the world’s first Supercomputers, and at the time of its construction in 1962, was the fastest of them all. At approx. 600,000 additions per second, it was considerably faster than our ICT 1301’s 11,000 calculations per minute – roughly 3,200 times faster.

Compared with its contemporaries, Atlas catered for a large number of peripheral devices. Atlas’s rich interrupt structure and the embedding of peripheral-handling routines in a fast read-only memory with special associated control registers meant that the Atlas Supervisor (Operating System) could handle a respectable number of devices These included (numbers indicate quantity in the Manchester Atlas):

Thanks to Simon Lavington and his website article The Atlas Story for the infomation on peripheral devices, who also mentions that prehaps the most important aspect of the Atlas design was the use of Virtual Memory – a concept still at the fundamental level of all computers today.

Simon Lavington was associated with Atlas from September 1962 until it closed down, first as a research student and then as a lecturer responsible for a special on-line A/D/A Converter which was used by Atlas for the digital analysis of analogue signals, particularly speech waveforms.

Three Atlas computers were built. The first one at Manchester University was the prototype. The 2nd was built for British Pretroleum with the University of London, and the 3rd was for the Atlas Computer Laboratory at Chilton.

Chilton Computing have a fantastic website with many photos of their computer installations.

“The Manchester Atlas is switched off. The console, an Ampex tape deck, a small section of the Fixed Store and the logic bay containing the Page Address Registers are preserved for display in the Department of Computer Science. Miscellaneous documentation, including a copy of the Atlas Bible and a mag tape containing the Supervisor, is preserved. The remaining equipment is sold for scrap.”
An extract from Simon Lavingtons MUSE/Atlas Timeline article.

Peter Dick writes:
“Atlas had a huge fixed head disk with a 36” diameter. The memory on Atlas was oil cooled and I was told they used to change the oil like one would on a motor car. I have no idea if that was true. Then there was the telephone between floors. Atlas had processor and memory down stairs and tape drives / printers / car readers upstairs. The operators upstairs used to phone their colleagues downstairs to start jobs etc.

Then there was the last week of Atlas operations. My memory is that they had to run a full shift as the Users hated ‘change’ and therefore hated the 1906A. When they came to the actual powering down ceremony, the printer was printing That’s All Folks as someone pressed the OFF button. And copies that has just been printed were given to everyone in the room. I got one as I was an occasional Atlas user.

Please remember the UK Government made it a legal requirement for all Government purchases of a computer that had “One Atlas Power or more” to be provided by ICL unless there were strange reasons why it should be provided from else where.

I joined Baric (49% BARclays Bank, 51% International Computers) in February 1971 and spent the first 18 months as an Operator on the in-house 4120. My second job at Baric, between roughly September 1972 until 31st December 1973 was that of Tape Conversion Officer. This involved transferring data from one tape format to another. The most common was from seven track ICL 1900 format to 9 track ICL System 4 format (aka IBM 360 format). And backwards. But I also did odd-balls, such as Leo 3 to System 4. And Atlas to 1900 series. For these jobs I bought time on the seriously big machines that had multiple tape drives.” 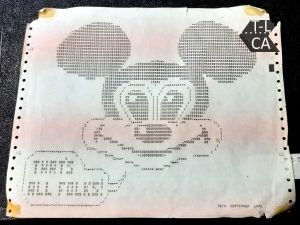