The Amstrad Notepad NC100 is an attempt at a tablet computer, before tablet computers existed. Built in 1992, it uses a Zilog 80 CPU at 4MHz, has 64k RAM, 256k ROM and was designed with word processing in mind. The power consumption was minimal, allowing 20 hours use on four standard AA batteries. Along with word processing, the computer contained basic tools such as an address book, calculator and diary. The monochrome LCD display as 80 column by 8 rows of text, but was also able to display basic graphics for icons. The display was not back lit. A Serial port, parallel port and PC Card port were also included. Memory could be upgraded to 1Mb (though I don’t know if this is ROM or RAM).

I remember when these were being advertised. Someting along the lines of “Learn how to use it in 15 minutes or your money back”. The big downfall was the 80 column by 8 line screen, it simply wasn’t large enough to easily write a full letter. It wasn’t back lit either, making it difficult to see after using it for a while. 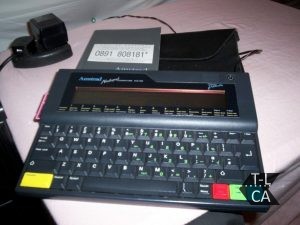 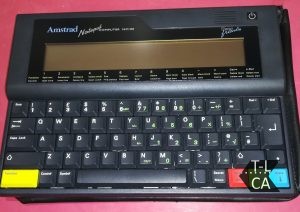